The work of Internationale Flugambulanz e.V. stretches far beyond caring for its members 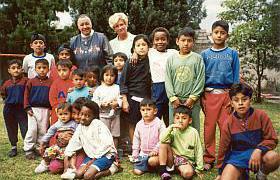 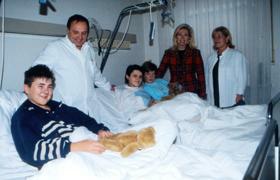 Support of the Alfons Goppel Foundation

The IFA has contributed to the education of underprivileged Ecuadorian schoolchildren and supported public institutions in Ecuador through the Alfons Goppel Foundation since 1992.

In 1992, the IFA organized the largest aid project in postwar history for Belarus with the two district chapters of the German Red Cross in Leipzig.

Further aid projects were also carried out in cooperation with other organizations between 1993 and 1995.

Since 1995, the IFA has organized expert conferences on current topics in emergency medicine.

Aid project for children injured by landmines in Sarajevo

In the summer of 1997, the IFA embarked on one of its largest aid projects since it was founded.

After making contact with UNESCO Special Ambassador Ute Ohoven, a team of IFA doctors launched an immediate aid program for children injured by landmines in Sarajevo. This involved delivering long-awaited specialist doctors and an extensive range of medical equipment to the Bosnian capital in what became known as the “air lift of hope”.

The IFA doctors received great recognition from all levels of society. Even Michael Schumachervisited the affected area in his role as a UNESCO Special Ambassador, and praised the work of the IFA.

UNESCO were also impressed by the success of the operation, and signed a contract in 1998 to work closely with the IFA in Bosnia. This reflects not only a significant event in the history of the association, but also wide recognition of  our worldwide humanitarian activities.

The IFA will continue to support humanitarian projects and people in need around the world.